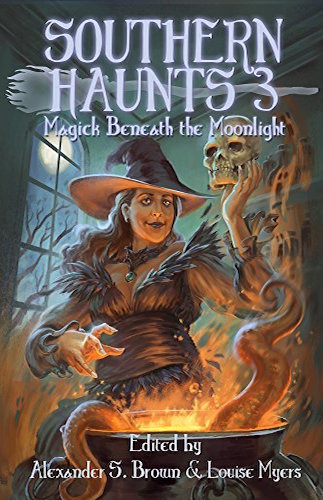 Deep within the South, read about the magickal folk who haunt the woods, the cemeteries, and the cities. Within this grim anthology, eighteen authors will spellbind you with tales of hoodoo, voodoo, and witchcraft.

From this cauldron mix, readers will explore the many dangers lurking upon the Natchez Trace and in the Mississippi Delta. They will encounter a bewitched doll named Robert from the Florida Keys, and a cursed trunk that is better left closed. In the backstreets of New Orleans, they will become acquainted with scorned persons who will stop at nothing to exact their revenge.

These hair raising tales and more await you in Southern Haunts 3: Magick Beneath the Moonlight. Read if you dare.

Available Now in Print and E-book