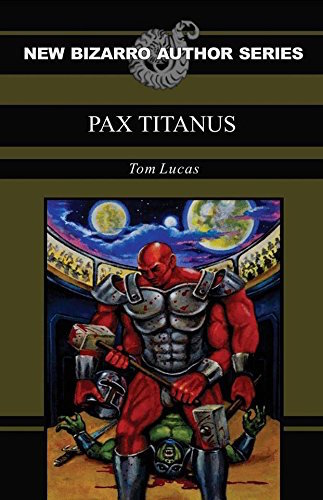 “Imagine the Epic of Gilgamesh rewritten as a Space Opera by the Aqua Teen Hunger Force guys and you have Pax Titanus in a nutshell.” — Dead End Follies

“It’s a hilarious romp, all right: not recommended for the serious hard science fiction reader used to predictability, but especially applauded for its ability to weave together a bizarre plot and disparate elements to ultimately create a heady mixture of an insane parody blended with interstellar supernova action.” — Donovan’s Bookshelf

“Pax Titanus features one of the biggest, most ambitious worlds in Bizarro history. Tom Lucas hits heavy.” — Garrett Cook, author of Time Pimp, Murderland and You Might Just Make It Out of This Alive.

“Massive war hammers, a coach full of cuss words, sexual seepage ooze, and crushed skulls, all crammed together in this BIG epic arena style battles. Tom Lucas knocks a memorable sci-fi out of this world… GET SOME!” — Beauty in Ruins

“Pax Titanus is big and bold and crazy, making it incredibly fun to read, but what makes this a worthwhile story is the love that Titanus has for his wife and son. It forms the frame that every other part of the story is built around and it adds emotional weight and poignancy to what is a pretty weird and far out book.” — The Fandom Post

“I’ve never seen so many over-the-top fights and wild-assed characters in my life… and that’s coming from a guy who was at the center of WWE’s Attitude Era!” — Ed Ferrara, former WWE/WCW/TNA writer/producer

Intergalactic kidnappers have taken the son of a simple construction worker, demanding that he enter the greatest fighting tournament in the universe, the SkullCrushFest, and murder every one of his opponents.

They picked the wrong guy to mess with.

Titanus might not be a natural fighter, but he’s got the greatest gladiator coach in the games and a not-so-secret weapon–his alien ability to increase any body part in size or length.

It’s time to GET BIG!

Available Now in Print and E-Book

NOTE: Amazon currently lists this book as OUT OF STOCK, but it is indeed available for purchase. Amazon and their silly games….